It was an enormous cruise ship. There should have been plenty of walking places built into the design. There weren’t. The Promenade, that ever-present feature of cruise ship fame had been cut down to a single-lane path that wove in, out and around small launches and electrical fittings. It didn’t circumnavigate the ship.

Who’s complaining? Me. I know that being able to travel to many of the world’s note-worthy places is a wild piece of luck, and I shouldn’t complain about any part of it. We plan our travel carefully, weighing cost versus comfort. And when we search for good deals, taking a cruise keeps popping its head up as the most economical way to get from point A to many many other points around the world. I am a reluctant cruiser, but as long as I can tolerate the short visits to interesting places, we will probably continue to book our interior rooms occasionally on these enormous floating hotels. It’s just not a perfect situation. What is?

We had signed up for a trans-Atlantic cruise that included a route into the Baltic region. It allowed for 11 different stops in 26 days. It’s a bit of ‘if it’s Tuesday, it must be Belgium’, but when the price is right, I can adjust to almost any travel style. And when we get to those points along the way, I can walk my heart out for a good morning and afternoon in each port, which is really what I like to do when I travel, so that’s all good. But what about those ‘at-sea’ days? On this ship, a big, beautiful new one, there was the down-sized promenade and a small running track on one of the top decks. So, looking for a better stroll, I took to the stairs.

From our pleasant small cabin on deck 11, I could climb the stairs to deck 15, loop around from the retreat pool to outside the always-crowded fitness room, up one deck to the surprisingly small running track, down again to the deck 15 loop, descend the stairs to the tiny little promenade on deck 7, up again to deck 14 where I could grab a cup of tea and find a solitary spot on one of the exterior lounge areas. It turned out to be an invigorating walk, and there were always plenty of places on the ship where I could find privacy afterwards for some reading or relaxing.

It was interesting to me that as I walked, and as I lounged, I noticed that many other passengers were finding their own ways to get in their exercise. As I looked for books in the library, I noticed a couple walked by four times. They had devised an indoor walking route around the many interior lounges. Then, in my ‘secret’ spot at the very back of the ship where there was a lovely dead end and few people, one man walked rapidly past me, where there was no more ship, turned around and walked just as rapidly away. He came back about 15 minutes later, with the same routine and again 15 minutes after that. On another day, it was a woman doing the same walk. On the days when I sat away from the crowd in my corner at the retreat pool, I noticed an intermittent stream of walkers, one or two or three at a time, looping through the area, returning about every 20 minutes. 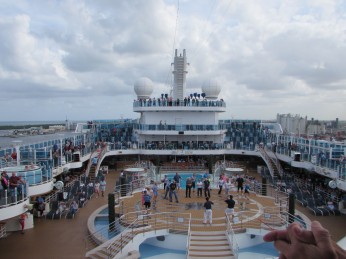 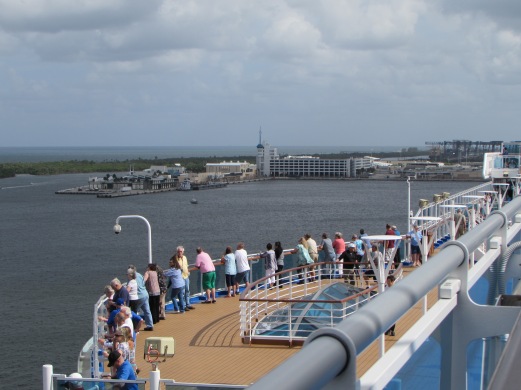 I was stuck on the ship for 26 days. Six of those days were traveling across the Atlantic Ocean from Florida to the Azore Islands of Portugal. I knew I had to figure some outdoor routine for exercise and escape. Even though the routine did not include the usual promenade walk, as things turned out, it did include great exertion and lots of pleasant relaxation. I even found empty hot tubs for a satisfying rest after my walk if I went early enough (so I did.)

Taking a cruise has an odd reputation that I find doesn’t have much to do with the way we experience it. We have been able to bend the cruise experience to our own idea of travel – economical and comfortable sojourns to interesting locations. A nice walk and a hot tub waiting when I’m done is nothing to complain about.

39 Replies to “Walking the Cruise Ship”

Where in the World?

Growing Up: My Coming-of-Old-Age Story

My Ukraine: One Year of Memories

Looking for a nice walk?

Copyright: susan@onesmallwalk.com . The words and photos are mine, all mine, and you can't use them without my permission. Linking to other blogs, however, is encouraged and appreciated.
Loading Comments...
%d bloggers like this: