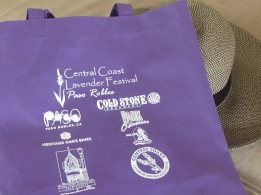 From one side of the country to the other, I am still loving lavender. I had just returned from Ohio, where I fell in love with the herb. I knew California was a much more friendly climate to the plant, so I looked up local lavender and found an entire festival to celebrate it that very weekend.  Central Coast Lavender Festival, in Paso Robles, was only a 40 minute drive from home, so of course, I made plans to attend.

The town of Paso Robles is just over the coastal hills from us, a hotter and drier climate, perfect for lavender cultivation. I had driven through Paso Robles hundreds of times and visited other areas of the town, but never had I seen the lovely central downtown park. I had heard of its charm and of its many restaurants, so I was eager for the visit.

Paso Robles is a wine-country destination, famous for its vineyards. It draws people from all over the world to visit the wineries. The food scene there is keeping up with the call from the tourists: fresh, local, organic meals that compliment the local wines. I knew that several of these restaurants were in the downtown square. Lavender and a good meal? It would be a pleasant Saturday.

As we drove into town, I wondered if I should have gotten more specific directions. I knew basically where I was going, but the details were hazy. Actually, since I’d never been to this particular area, the details in my head were non-exsistent. But it seemed like it would be simple, and it was. Up ahead as I drove into town was a throng of people. Logic would have it that that was where the festival would be, and today, logic prevailed. I found easy parking nearby, grabbed my hat, and walked toward the crowd. Just down to the end of the block was one of the most pleasant downtowns I’d ever seen. Why had I not visited before?

Paso Robles can get hot in the summer. I left home enjoying 68 degrees F (20 degrees C) and arrived to the festival in 90 degrees F (32 degrees C.) But the downtown square was designed to keep people out of the sun, with trees shading the sidewalks and a huge canopy of greenery towering over the entire park-like square. Today, the aroma of lavender pulled me toward the booths, laid out along the walkways of the outdoor plaza. 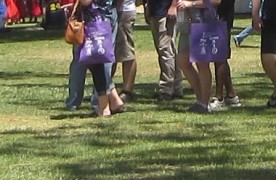 Lavender-colored bags were handed out to everyone, encouraging us all to fill them with not only live plants, but also lavender essential oil, lavender soap, lavender spray, lavender sachets, lavender tea. Then there were all the other items that accompany festivals in California: hand-crafted wooden bird houses and cutting boards, hand-crafted beads and jewelry, hand-made hats and baskets and clothing.

Under the enormous live oaks, people cheerfully sold and others bought whatever their desires or pocketbooks allowed. Entertainers took their turns providing music and dance and authorities gave information about the benefits of lavender. Apparently, it helps every known ailment. As I walked the pathways, I enjoyed the outdoor scent of lavender, the sound of people enjoying themselves, talking and laughing, and the sight of a California main square restored to perfection.

I escaped the growing heat by sitting down to a nice lunch at the corner deli. A crowded gathering had enticed me to finally visit this buzzing downtown. Why had I waited so long? Now, I looked around the square, planning my next visit. Which restaurant would I try on my return?

Where in the World?

Growing Up: My Coming-of-Old-Age Story

My Ukraine: One Year of Memories

Looking for a nice walk?

Copyright: susan@onesmallwalk.com . The words and photos are mine, all mine, and you can't use them without my permission. Linking to other blogs, however, is encouraged and appreciated.
Loading Comments...
%d bloggers like this: